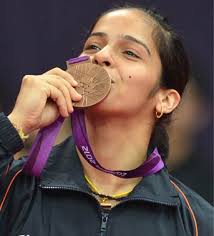 Saina Nehwal was born in 1990 as the daughter of Harvir Singh and Usha Nehwal. After completing her school, she focused her energy on badminton training. Due to the unlimited support she gained from her parents, she managed to join in Pullela Gopichand Badminton Academy. Even though Saina was born in Haryana, she spent her childhood days in Bangalore. The life and achievements of Saina Nehwal is truly inspirational for youngsters.

AT the age of eight, she started playing badminton. By the age of 10, she realized that badminton is her profession, and started heavy training. Her efforts soon became successful. In 2006, she
became the first ever Indian woman, to win Philippines open. It took two more years for her to win a world cup title. In the year of 2008, she wrote her name on the world junior badminton championship trophy. From that day onwards, she holds the crown of women’s badminton in
India.

The history of badminton in India can be divided in to ‘before Saina ‘and ‘after Saina’. She really managed to improve the viewership of badminton games among Indians. Even with an immense fan following. Saina’s point of focus remains unmoved. Badminton is the first and most important preference in her life. Due to her dedication and hard work, she managed to win the BWF super series title. The country has shown respect towards the achievement of Saina by presenting her “most prominent player 2008” award. Before Saina Nehwal, no other Indian woman has ever won an international badminton title and this is really proud for India.

She recently released her autobiography, and it became a massive seller in both India and abroad. With this book, she aimed at motivating Indian youth. In her autobiography, she says that it was
her dream to bring pride to the country. Her autobiography not only describes Saina – the player, but also portrays the life of an average Indian woman. Saina also won Rajiv Gandhi Khel Rathna Award for her excellence in badminton.
Like many other Indian badminton stars, Saina Nehwal also learned the basics of badminton from Pullela Gopichand Badminton Academy. Her co players will never forget this daring fighter. She never surrendered easily, without a brave fight. Anybody who watched the semi-finals of London Olympics badminton game will never forget Saina. The determination and thirst for success was clearly visible on her face. She is a role model for the budding talents in Indian sports. Her lashing smile and confident face will always guide the talents in future.