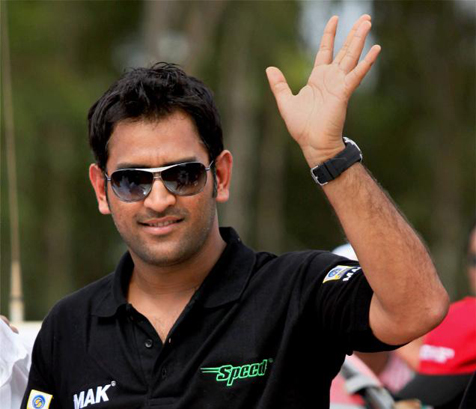 Hailing from a village in Ranchi, Mahendra Singh Dhony was an ordinary Indian youngster with endless passion towards cricket. In his early childhood, he was into badminton and football. But destiny once did send him for a local cricket match. Though, he couldn’t well perform in the match, his skill, as a wicket keeper was recognised and nourished by the Commando cricket club. Slowly he started to shift his focus to cricket which took him to the position that he plays today.

When Gangualy got tied with all the issues, there was no other choice but Dhoni. Sachin and Dravid were proud and confident to suggest him to the heights of captaincy. Till this date, Dhoni has proved in multiple ways that their decision was not wrong and their confidence was not in vain.

It is not about applying sophisticated cricket technique or new gaming modus operandi, Dhoni has his own ways of managing his team. He stood by them no matter how hard the time was. When he won, he gave the credits to his boys and when he lost he took the responsibility all by himself. This was more than enough for the team to trust him, follow him and grow the team spirit. From a proficient wicket keeper to the best captain, his path was steady and strong. It was not a single swap. But in his journey he proved himself. From the date of his first match, till today he have 8 ODI centuries, 17 man of the matches, 6 man of the series and an overwhelming world cup to his credits. What more should a cricketer have to boast upon. But even after the triumph of glories, he is still, the old village boy with the loyalty and respect to his team members.

On winning the ICCI World Cup for India against Sri Lanka in 2011 with an unbeaten 91, India bowed in front of his amazing captaincy. Sachin Tendulker , then said, Dhoni was the best captain under whom he has ever played with. The thrill of winning the first T20 world cup against Pakistan was even higher.

When Chennai super kings hired Dhoni for 1.5 million for their IPL team, they were confident on making the right decision.  He again proved the worth for the money by bagging the IPL 2 times and winning the Champions League T20 trophy for the team. Married to Sakshi Rawat, he spends a larger part of his income for the charitable trust run by her for orphan children.