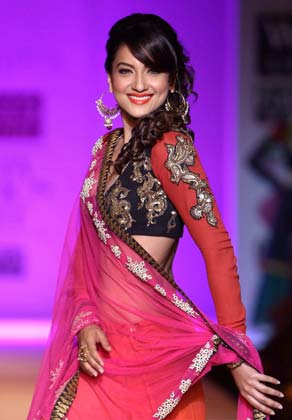 Tanisha Mukherjee was the first runner up, Ajaz Khan was the second runner up, and Sangram Singh made it to 3rd place.

Gauhar couldn’t believe that she could beat the other contestants in the Grand finale. When she was declared the winner she was on the top of the world, her happiness had no boundaries.

She thanked the audience for such huge support. According to her, the journey through the show was a roller coaster ride and she is happy she could make it.

The big boss is a reality show where the contestants live in a house together confined to it throughout the journey of the show facing different tasks and voting each other out in the course of the game. The one who stays in the house till the end is the winner and Gauhar made it this time. She took home a cash prize worth 50 lakhs and the trophy of Big Boss Season 7.

Gauhar’s victory has made her and her family happy and proud. Her fame has spread at most now as her name will be forever etched in the history of Big Boss Season 7 as a winner. The actress has said that this would be now a great platform to achieve stardom.

The Hard work Gauhar has really paid off and she is so happy to have won one of the most famous reality shows in India.

After participating in reality shows like- Jhalak dikhhla jaa’s third season and the Khan Sisters, this was her third reality show and was a very challenging one. Gauhar was a contestant who did it all to win the victory trophy. She was strong and bold, she showed affection, she stood for her loved ones, and she stood for what she thought was right.

She also found her Mr. Right in the show Her romance with the co-contestant Kushal Tandon was an interesting highlight in the show. She was also a part of the fights and controversies but she impressed all and showed her character clearly when she quit with Kushal at the time he was evicted for attacking VJ Andy who was a co-contestant. She, later on, returned to the show.

Kushal and Gauhar confessed their love in this reality show, which was the interesting part of the show. She let her be herself and followed with the game.

Gauhar’s sister and mother were present for the finale to congratulate her for succeeding in the toughest reality show. Gauhar was in the seventh heaven when she won the grand finale of Big boss Season 7 throughout the journey of Big boss. She had challenging tasks to face, but she was the toughest contestant who overcame the entire task in a better way and finally won the Reality show. Gauhar was deserving and finally, she won the game and became the youth icon of India.