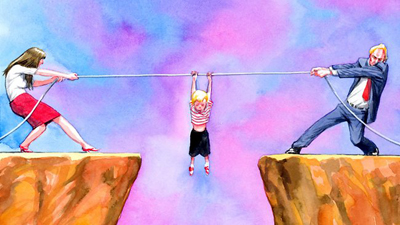 Divorce rate is increasing globally and it is not a good news or sign for anyone. Whatever is the reason for increased rates of divorce; there is no doubt that it affects everyone in the family especially “the children”.

During divorce, children get confused about what’s going on and why their parents are not able to stand each other anymore. Sometimes they start to blame themselves and feel left alone. Some kids become violent or bully other kids at school as they feel jealous of their classmates whose parents are still together. On the other hand, some children make themselves isolated and don’t want to face the world as others might ask them; questions or feel sorry for them. Many a times, children have to go through many changes like- change of home, school or their neighbourhood that put disastrous effect not only on their academic performance but also their emotional and physical well-being.

How to prepare kids for separation

Proper counselling and keeping communication open is the most effective solution for children to cope up with the divorce process. If divorce is on mutual understanding, then both parents should keep in touch with the child and make him/her understand that nothing will change in their relationship as a parent, but they won’t be living together anymore and as per the child’s comfort be ready to give custody to the parent who will be able to give more time and care to the child. But, if divorce is due to some harsh reasons such as physical violence, then maybe one should try to get counselling from the professionals. If a parent is violent or into substance abuse, then a child has to be protected by taking a divorce.

Can divorce be positive?

Yes, many a time, when a parent is culprit of violence or alcoholism or any such behaviour for that matter divorce should be filed for the sake of the child and his safety. Child should not live with a parent like this because it will actually destroy his future. In these cases, sometimes the children themselves are very supportive and get themselves ready to live separately. They are very co-operative to their one parent who is more supportive and on the right track, in many cases they take the side of their mothers but it can be the other way around.

Divorce is the end of marriage, but certainly that increases the responsibilities of one custodian parent and it should take into serious consideration. If that’s what left as an option, then it is better to take divorce and give your child a peaceful atmosphere in the house, but if you can stay together and work out differences then every single thing should be done to save the marriage for the sake of child’s home.