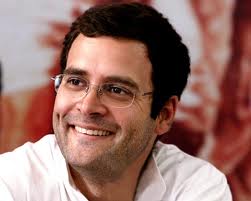 With his grace, charm, words and deeds, Rahul Gandhi has always stood tall among the crowd. This youngest scion of the most powerful political ascendancy in India was able to make his position and stand strong. Though he had the regal political legacy of four generations to boast upon and boost his political career, this young politician always had the will to establish his vocation and position in the history of Indian polity on his own.

With a shy deportment, a sweet smile and the most pleasing behaviour, he always is boy next door. The most eligible bachelor and the highlight of congress party, is making his route to the PM’s position. From an AICC General Secretary, he elevated to the position of the party Vice President and emerged as the most celebrated youth icon in India, all out of his parent’s shadow.

Born on June 1990, his childhood was not that colourful, as he was always in the surveillance of security guards after the assassination of his grandmother, Indira Gandhi and father Rajeev Gandhi. His world was confined to his mother Sonia Gandhi and sister Priyanka. Even today, from a personal note Rahul remains a mystery, as his connections to the outer world is confined to his close family and a few friends to count. He completed his M.phil in Developmental Economics, from the prestigious Trinity College, Cambridge University and started to work with a leading Management consulting firm, run by management guru, Michael Porter, The Monitor Group for three years.

He always confined to his world, with some cricket, economics and little outdoor activity. His entrance to the politics in 2004 was a pleasant surprise for the bureaucracy, media and obviously the polity. But it was an emergence of a new dimension, not only for the Nehru political reign, but for the political structure of India so far. He was the voice of the youth. It was a renaissance to the frozen administrative set up in Indian. “The future belongs to the youth of India,” said Rahul. He induced the young blood into his army.

His dramatically rich campaigns, his influential talks and his heartfelt enthusiasm, swiped the heart of youth and the downtrodden. He moved his way for “discovering India”. He never hesitated to have food from the filthiest dhabhas, travel in the Mumbai local train or sleep with the Dalits in Amethi. This made his position in their hearts which easily helped to reach the cabinet. He is a ray of hope for the downtrodden, flair of truth and zest for youth. The future of India will be safe in his hands, believes the nation who trust the fire in him.