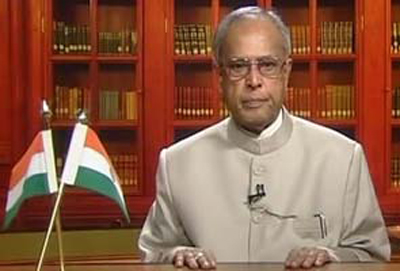 His Excellency- Shri Pranab Mukherjee is a current President of India. He had a long and distinguished political career that stretched to nearly six decades, during this period he was a part of the Union Cabinet and held many important portfolios, such as Finance, Commerce, Defence and External Affairs.

Shri Pranab Mukherjee took office as the thirteenth President of India in 2012. President Mukherjee was born in the year 1935 in Mirati, West Bengal. He has served the country in many ways, as an astute leader who guided his party through easy and hard times, as a hard working minister who worked in many crucial areas, and finally as an able President, who was elected to the highest office by the people of India. The country rejoiced when he took office as the President, even those who opposed him also came abroad and said the country has selected the best man as the First Citizen. As required by the Constitution of India he resigned from the Congress party and the administrative and unofficial positions before he took office as the President of India.

o   Minister of Finance. He became ‘the Finance Minister’ in Indira Gandhi’s ‘government in 1982’, under his leadership there was a substantial improvement in finances and the government were able to pay off IMF’s loan amount. He, also, appointed Dr. Manmohan Singh as the Governor of the RBI during this period. Prime Minister Narasimha Rao appointed him as the ‘Deputy Chairman of Planning Commission’, a post he held from 1991-96. During this time he opened up the country’s economy and with the help of Dr. Manmohan Singh, who was the finance minister and introduced many kinds of ‘economic reforms’. He was appointed as Finance Minister from 2009 to 2012, during this period he introduced a number of reforms in taxation procedure, as well as in schemes running under social sectors. In the year 2010, he was given ‘Finance Minister of the Year for Asia’ awarded by ‘Emerging Markets’, by a newspaper.

o   Minister of Defence: He held the portfolio of Defence in the Union Cabinet from 2004-2006. During his tenure as a Defence Minister he cooperated with both USA and Russia.

o   Minister for Foreign Affairs: He was a Minister for External Affairs from 1995 -96 and again from 2006-2009. He was instrumental in creating a cordial atmosphere that helped India to sign ‘U.S-India Civil Nuclear Agreement’.