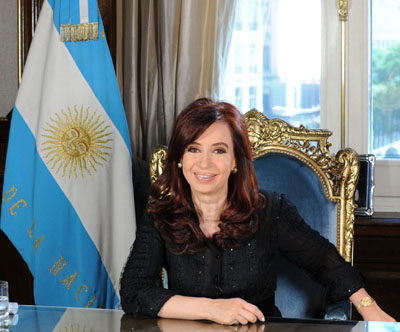 Christina Fernandez, lawyer, political activist, and spouse of a President, is a two time elected President of Argentina and is one of the trios of powerful woman politician in her own rights; the other two are Angela Merkel and Hillary Clinton.

Christina Fernandez is the second Women President of Argentina, the first woman president was the iconic Eva Peron. She is one of the most powerful women politicians in the world, along with Angela Merkel. Argentina is a patriarchal society and for a woman to be elected President twice through free election shows that Christina is not only capable as a wife and a partner of a president, but she is also important in her own right. Eva Peron, the other woman who was the president of Argentina was not an elected president. Christina is a highly educated person and thoroughly well versed in the political arena, because she has come up from the ranks of her chosen political party Justicialist Party.

Birth and Education: Christiana Elsabet Fernandez was born in La Plata, in the year 1953, and studied law in the ‘National University of La Plata’, along with her future husband, the late Nestor Kirchner, a former president (2003-2007) who decided not to run for a re-election but support his wife’s candidacy. After they graduated they married and decided to work as lawyers for the time being. Christiana is a Roman Catholic and has two children.

Political Career: Christiana started her political career by joining ‘Peronist Youth movement’, but discontinued her political career to concentrate on her law practice. She rejoined political activity in 1989 she won an election for the provincial legislature of ‘Santa Cruz Province’. This is the beginning of a very successful political career that is still continuing. In the year 1995, she won an election for the Senate as a representative of ‘Santa Cruz’; she was chosen for the ‘Chamber of Deputies’ in the year 1997 and was again in the Senate in 2001, after winning an election. In the meantime, Nestor won the election and became President of Argentina in 2003 and Christiana not only acted as the First Lady but also continued to improve her political standing.

Economic policies and Foreign Relations: Christiana has not joined the other Western nations in imposing sanctions against Iran. She has cordial relations with Iran as well as with China. She had initiated several tax and labour law reforms, despite protests from some sectors of the public. In foreign affairs, she has supported a place for Palestine in UN Assembly despite protests from the Jewish lobby in Argentina. Though a devout Roman Catholic, she signed the same sex marriage in Argentina.

Health: In the year 2013 doctors discovered traces of blood in her head due to old head injury; she was in hospital for some days and blood was drained from her brain.