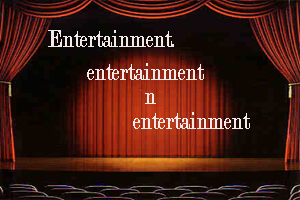 We all know that man by nature is a gregarious animal. He loves to social, to entertain and be entertained. The life of youth has become so hectic that they need time to relax and entertain. The daily routine of the today’s generation is very tiring. Entertainment, in such a busy life gives us the change, the relaxation so that life does not become a drudgery of routine.

Last month I read in an article in some magazine that social scientists have conclusively proved the positive impact of such relaxation, which enables one to get back to work with renewed vigor. Such is the impact o entertainment on the minds of people. This is the reason why some organizations encourage their employees to go on vacations, expeditions, and sights seen, etc. This enriches the individuals and consequently the society.

The tremendous boom in this area has made an immediate impact in the awareness level of youth today. They are better informed and knowledgeable than their predecessor. While the group activities like games and expedition inculcate team spirit, develop social value and interpersonal skill, television and radio give a fillip to their awareness level. They also help in spreading, desirable cultural, social norms and values. The new millennium has seen the advent of a powerful medium of entertainment on education, through the internet. This shall indeed prove to be a boon to students for self development and career planning.

According to me the only disturbing aspect of this boom is the gradual degeneration of moral values in the society. This is due to the overexposure of violence and sex to impressionable minds. So great is the attraction of some media like cinema, television and now internet that people get addicted to it. This is indeed very harmful as it distracts them from their work and studies, making them leas a life of a recluse. The most disastrous consequences of overindulgence are, when people try to emulate their role models in films and TV that ultimately leads them on to crime. Here I would like to narrate the example. You all must be familiar with the cartoon character Shin Chan. My cousin was so influenced by the character that he use to refer himself as the Shin Chan and use to act like it. It is not uncommon to see, many a budding career gets snuffed out, even before it can bloom.

Notwithstanding the above, the importance and the role of entertainment in our lives cannot be diminished. Some restraint on the part of individual and effective control by the government can make this medium helpful in enriching the society and the lives of the individual immensely.