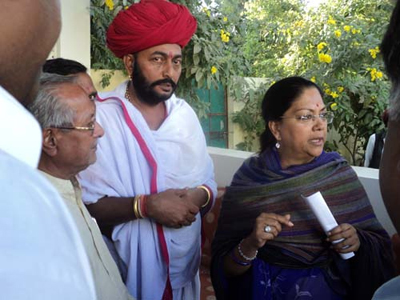 Otaram Devasi, 48 has made a page for himself in the history with his appointment as Ministry of Cow Affairs in the state of Rajasthan. It is first of its kind in the country. Divorce originally belongs to a live stock dependent community Rabaris loves himself to be addressed as “Gaupalan Mantri”. His attire even makes him look like a cow herd and the minister is highly passionate about the cow protection.

The BJP and Vasundhara Raje have finally fulfilled their promise during their poll campaign and established a separate ministry for cow affairs. Even though it was initially established as a standalone ministry for cows, it was later converted as a Department. It is due to the lack of legal power to the states to set up new ministries as per the constitution of India. Hence, the state of Rajasthan has turned “Cow Affairs” as a Department and merges it with the Temples Protection ministry and handed over the charge to Otaram Devasi in October 2014.

BJP and Sangh have taken the protection of cows as its new agenda. It seems to be that Mr. Devasi has given a considerable contribution towards it. The party and Sangh believe that its new slogan and move would help it back as in the case of Ram Mandir earlier.

Speaking of his tenure as a Minister for Cow Affairs for 3 months, Devasi has expressed his great satisfaction. He also stressed on the importance of Cow Protection and stated the steps initiated by his ministry in the regard. A helpline number for cow protection, special grass fields etc said to have been of great help to cows. He further added that other states should come up with special measures for cow welfare with Rajasthan as a role model.