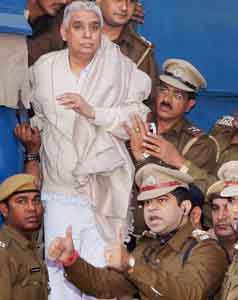 Rampal Baba, who is a hot topic of the week gone for Judicial Custody till 28 November due to controversial activities. He was caught by the police from his Ashram- “Satlok Ashram” located in Hisar, Haryana. It is a very challenging task for Police, to bring true news and other hidden secrets about Baba as the Ashram is very big and for the same, various groups of police has been appointed which are continually researching to get full-fledged information.

Police found various cameras in the Ashram including women’s Bathroom area. The screens to check live footages are placed in the Room of Baba Rampal’s restroom, VVIP area, and other selected places. Police said that, CCTV recordings can play can an important role to reveal entire truth of this case.

Secret Room In The Ashram

It has been in the air that Police team has found an underground secret room. Police will disclose more clearly about this news after interrogation with Baba Rampal and full search campaign in the Ashram.

Is It Ashram Or A Kingdom?

It is said, Ashram is very huge (constructed on 12 acres) and very challenging to complete search operation in a proper manner. What it includes are:

Mystery Will Be Over Soon!

Police gathered a lot of proof, illegal and shameless things from the Ashram, based on the fact, Police team is guessing that there are various other objectionable activities also held in the Ashram which is not a good sign for Baba.

Baba Rampal, till 2000 was a dowdy junior engineer in a Haryana irrigation department. He found careless about his work and he resigned and finally accepted the resignation by the department on May 2000.