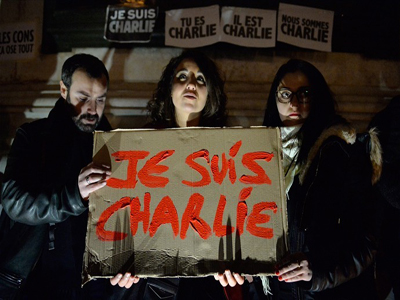 Paris (AP) – After settling/ end terror rampage after 3 days around Paris, now security forces trying hard to maintain the situation in the city. Police started hunting for few suspects with which Paris natives are still in the fear of unknown terror.

Investigators trying their level best in analyzing to what extent the attacks were coordinated.  Various countries, including India, cautious and activated extra force to stop this kind of attacks in the country. In Mumbai, India, here, police blocked various posts, which are made to fun of somebody, can be a threat, as this was the reason, that is why Charlie Hebdo’s office attacked by the terrorists.

On the other hand, in the east region of France capital- Paris, in the supermarket, 4 people were mortgaged by the terrorists Amedy Coulibaly and his better half Hayat Boumeddiene. Cops searching out the terrorist Hayat, as they are predicting of a big terror in the country can be held and Hayat needs to be arrested as soon as possible as she may have galore of weapons and other destructive stuffs with her, which is not a good sign for Pairs natives. During the operation to save the people from the terror attack, Coulibaly was killed, but his wife was escaped successfully.

On Friday, in the office of Charlie Hebdo, the two brothers Cherif Kouachi and Said Kouachi were killed by the cops as well as released many people who were trapped there. Police is linking the two attacks held on the same day, one at the Charlie Hebdo office and another one in a supermarket and based on the same investigation is still on. Even, police confirmed, the attacker in the supermarket Coulibaly and the another attacker in the Charlie Hebdo office- Cherif were great friends. Both were met with a radical Muslim leader “Djamel Beghal” who was French Algerian man convicted of terrorism in 2010 along with their wives in the central France. Jamal is now in the jail for 10 years for plotting terror attacks in the country. In 2010, cops searched the Coulibaly’s house and got galore of weapons. Police say, Coulibaly and Cherif, then met in the Jail and later on they use to meet with each other very often.