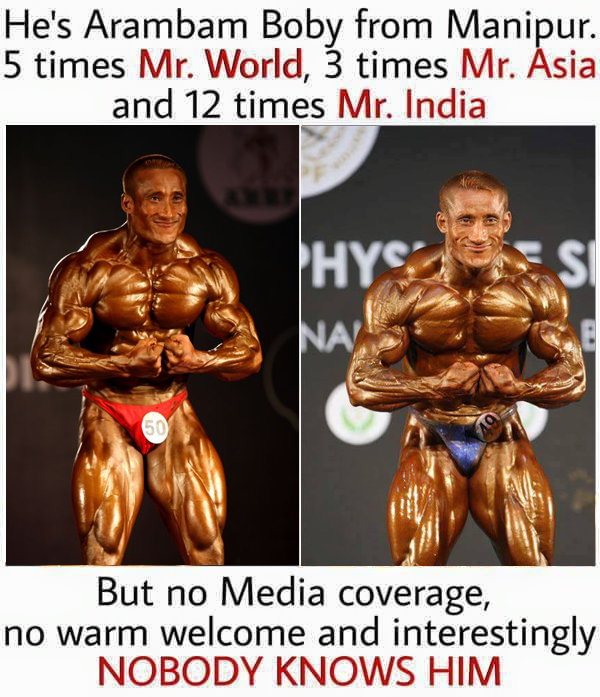 Do you know Arambam Boby? A Big NO, right? Well, nobody knows him except few people from Manipur and this is the only man who has represented India in various body building national and international competitions and won 5 times Mr. World Body Building Championships ever any other Indian has achieved the same.
It is very regretful to know that nobody knows such an amazing and talented athlete who can easily become an inspiration to all. Whether we call our not so much interest in seeing bodybuilding championship or we can simply blame on the media coverage which was none. No matter who is responsible for the same, but nothing is too late. We have tried to cover up more and more information about this amazing YOUTH ICON OF INDIA who should be known to each and every citizen exactly in such a manner as everyone, including a child knows to the famous cricketers, like- Virat Kohli, M.S Dhoni and others.

MEET UP WITH one an only Arambam Boby who is having an extraordinary journey of a world championship, enough to be an inspiration to all. He is the one who has won the title of Mr. World in the 2nd World Body Building and Physique Sports Federation in 2010. And that was the period he was completely unstoppable. He has participated in various national and international championships and won various titles along with the heart of the people. Here is a quick snapshot of his ultimate achievements-

After winning so many titles, this athlete is still not recognized by most of the Indian people, including our Government. Flashing back to his life, Mr. Boby has a very simple family background. He was very young when his father expired and brought up by his mother. The period was very tough for Mr. Boby due to financial issues and lack of family support, but still, he didn’t give up and work hard to shape his body, unlike others. His spirit, hard work and never give up attitude pushed him so hard and finally, he has achieved lots of achievements, but NO RECOGNITION. His ultimate journey from nook and corner to a world championship is completely unique and everybody should respect this athlete and take a great motivation from this ultimate bodybuilder whose journey wasn’t so easy at all. In a personal interview, Mr. Boby has admitted that he never got any support from the Government at all. In order to be participating in any championship, he has invested everything from his pocket and that was a costly affair to him.

From his regular diet to training, traveling to various countries and other various expenses totally drained him and later he decided to be participating in national championships only. Even, his approaches for Arjun award were completely ignored and after so many efforts and doings, he unable to get what he actually deserves to have.

He urges the Government to take sports seriously, including- bodybuilding and help the athletes by offering all the basic facilities and support to make India proud.

So let’s say it together- We Love You Arambam Boby and respect what you did for India… Must share the post as much as you can so that we all can know more about this gem.