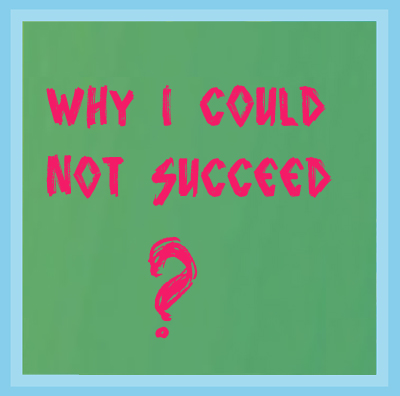 Why I Could Not Succeed

Success doesn’t mean the absence of failure. Behind every success story there is also a story of great failure. Unfortunately while we are aware of the great achievements, we do not know the failures, the tears and toil that accompany it.

This is the story of tears of a girl who has been trying to get through the different bank exams since five years but could not succeed. It was in her second year of B. com when she decided to appear in the IBPS exam. Owing to her lack of sincere preparation she failed to clear the exam.

This was her first failure and was unable to deter her. She was much determine and decided to join the banking coaching which was the best in her town. Though it was difficult for her to manage between her college studies and the banking preparation yet she carried on. She learnt many new things that she was never taught in her school or college. This time with a good preparation, she appeared in the exam. She was much more confident this time. But to shatter her confidence and hope, the result was negative for her. She did not clear even this time. But her friends who took coaching along with her did. This added salt to her failure. She was in tears because she had disappointed her parents and peers who have spent their valuable money into her coaching.

For a moment she decided to quit and to choose some other path for her career but it was her dream goal to work in some reputed bank. Therefore she continued with her college and the regular preparations. After a year she completed her graduation with flying colors which gave her confidence to appear again. She appeared in many bank exams for clerical, managerial and officer’s post but could not succeed in any. These failures destroyed her confidence and each failure made the next result even worse. Now five years have passed and she is still appearing in the exams with the hope of success but the result is always the same.

She is not the only one with this story of failure. This is the agony of many students who are intelligent but could not clear the bank exam. To turn the stumbling block into a stepping stone, one has to overcome the fear of failure and doubts. The only possible way to overcome them is to ensure that we do not commit the same mistake again. This is the thing that the girl and many of us fail to realize. We never try to rectify our mistakes and shortcomings. Every time we appear in the exam, we make same mistakes and thus fail.

For success in the bank exam we have to analyze the area where we are weak and then to work on it. Hard work is not enough to get us success, we need to work smartly. Remember that failure is just another step that takes us closer to our goal. If we fail yet again, it means that there is one more road that we should not take. Thus it gives us valuable experience, and as we all know ‘experience is a great teacher’. Therefore learn from your experience and then move on.