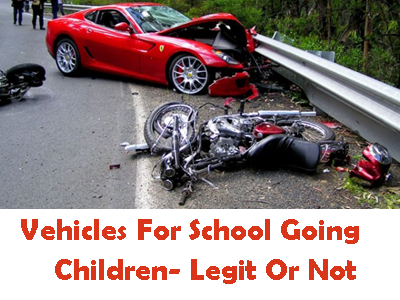 “GIVE LIFE NOT BIKE TO YOUR CHILD” This line you may probably heard a lot of time in the advertisement, newspapers, road side Billboards and other places, but how many follow the same?

The numbers of school going children with personal vehicles are growing by the hour. Every school has at least 150 senior and middle segments, students that come to school and go home by their own vehicle, whether it’s a motorcycle, a scooter or a car. Although research shows that students in Asia, mostly have motorcycles, the rest of the world’s students mostly have their own cars. This has its effect on children and the society, read on to know more.

Somesh- New Delhi, India, 14 years old, died in a road accident. The actual reason of the accident was the speed and driving without Helmet. According to the victim, he was doing a rash driving with some stunts and crashed with a loaded Truck….

If your child has a car/bike of his own, it is obvious that he is going to put himself in harm’s way several times. Trying to pull off some stunts to look cool, and then end up in a dump on the side of the road, it sure is to happen. Your kid also will surely go out of the bounds which you have set for him; he will surely wander off to his friend’s house more often than usual. If he is a usual boy, then it is a surety that he will break the speed limit and get one or more tickets once every month. But you should understand that once your kid starts growing, he won’t like to be driven everywhere by you. He would want some independence to give him the feel that you trust him with things and he is a grown up now.

I do not totally opposing to give the vehicle to the kids, but it should be given at the time of correct age as well as once you gain confidence that your children obeying your order as well as rules, you can hand over vehicle to them as it is a necessity of the life.  Your kid gets more responsible towards his life and surroundings. He remembers to wash his ride daily, fill the gas tank and all other things. By the end of the school, he will become a good enough driver to drive his family safe back home. The headache of taking your kid everywhere all the time is now gone, he can take that responsibility himself. Whatever you say or think about this situation, it is important for your child to have a bike/car of his own. As long as he obeys the rules you set for him, there’s no harm. After all, he can take you shopping and to the doctor.

As long as he understands that the restrictions made for him are for his own good, there’s little chance that he will wander off with his friends. But remember not to keep these restrictions for much time, once he gets a bit used to the vehicle, you should allow him to go far away from the house, as long as he informs you before going. Your child should feel and become independent, responsible and that you trust him, the rest of the puzzle is solved by itself. Be a good parent and educate your children with the advantages and disadvantages of driving along with a proper remedy to get over from it…. You’ll see everything will be NORMAL!