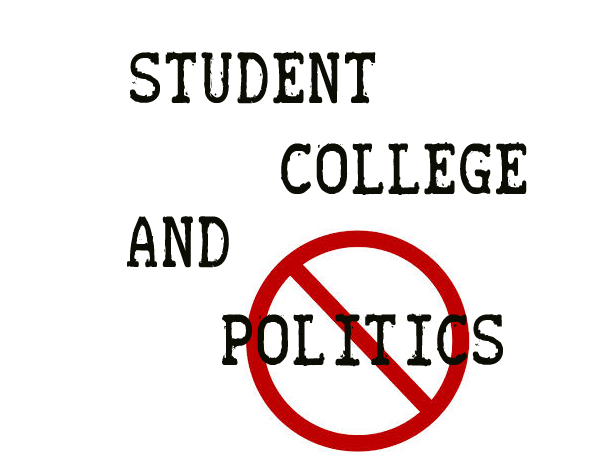 These days the politics in college is becoming very common. Students are getting more and more influenced towards the politics. I am sure all of you must be familiar with the concept of politics in the college. Basically what students do is they form different parities among them and organize elections. The winning party rules and organizes all the events of the college.

I believe that this concept of politics in college is not fair for the college students. A student is expected to devote his time and efforts in studies, rather than involve himself in the rough and tumble of politics. From my point of view, Studies and politics are in fact diametrically opposite attributes and they are not so compaitable. However it is really unfortunate, that money and power is attracting the youth towards the same and we can find more and more students involving themselves in the politics in college.  This is for, in the words of G. Bernard Shaw, a person with political aspirations “knows nothing and he thinks he knows everything”. That points clearly to the political career.

I believe that today’s politics is no longer a noble service that I used to be. It was associated with social service and a political worker was first and foremost a social worker, or reformer. Here I would like to narrate an example. This is an example to which everyone is familiar with. During our struggle for independence it was the youth, the social workers that spread Mahatma Gandhi’s message throughout the length and breadth of the country. They were also in the forefront in unifying the country and reforming the country, by educating them to the public on social evils like child marriage, untouchabilty, etc. ever since independence the political party politics, has vitiated the political atmosphere of the country, with the morality and ethics touching and all time low. But this politics we can say the best and recommended profession too, where the power and leadership quality can turn one’s fortune overnight by resorting to corruption.

When students involve themselves in politics, later they get in touch with the local politician and political parties. If I provide you my real time experience then I would say that I and you might also have seen  a number of students who after doing college move to join the local political parties. Sometimes these political parties also support the student’s parties at the college so that at the time of election these students’ parties helped them in publicity and promotion. It is unfortunate to see the students being increasingly exploited by political parties for their own interest in respect of money and reputation. They exploit and spoil the young generation totally, for their dirty blood by using them to promote their divisive politics. Most of the times they are on the front page of the newspaper because of violence and other unethical activities. Promising youth’s career is totally ruined as they are not using the ethical path today. This could be a very dangerous sign as if one young person will spoil then he will spoil 10 more friends and those 10 youth will multiply more. So we need to be responsible in stopping such sort of activities.

The students should, therefore, not take part in politics. I believe that the colleges should take serious steps to ban the politics inside the campus. The political parties should behave responsibly and involve students in their bad and unethical practices. They should stop by the high authorities from doing so very quickly so that we can able to save our nation’s future and if we educate all effectively then there is no more doubt that we will get a good leader one day for sure who will groom our country one day.