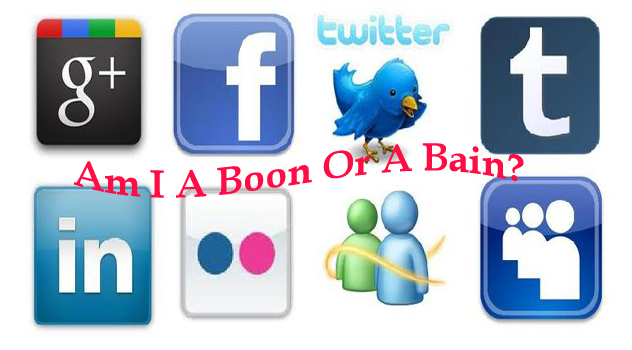 Is Social Networking A Boon Or A Bane? Man is a social animal. However quiet or silent a person may be, there comes a time when he wants someone to talk to and express himself to. This is one of the basic needs of a human being other than food, shelter and clothing. Today, man is living in a super fast world. The one who moves ahead with time is the one who maintains minimized pace with tech these days. Internet has made life a lot simpler and comfortable. There is no work today that cannot be done online.  Shopping, studying, and business moreover charity is also possible on web. Then why not networking? Social networking is very popular these days. People need to realize the importance of innovation, the pains taken by the developers and also the benefits gained by the audiences all around the world. After survey on youth it has been found that most of the youth spends lots of time in Facebook, Twitter and other social networking sites only for chatting and gossiping. We can judge by it that how much time youth are wasting in only gossiping instead of their studies.

If I held a sleeping pill in my hand, what would you take it as? A boon for an insomniac? Or a way to kill oneself? Each thing has a positive side as well as a negative way to be projected as. Excess of everything is bad. Even if a person drinks excess of water his stomach will start paining. Same goes for social networking as well. Social networking has a lot of benefits but it depends solely on the users the way they wish to utilize the facility provided. Looking at the brighter side of social networking, one can see the advantage it offers people with. People from across the world can communicate without spending huge amount of money. Thousands of people find jobs just with the help of so called social networking sites. Moreover, most of the social networking sites come with privacy policies and regulations which if adhered to no one can ever misuse your personal data.

The social networking sites are considered to be a menace for children. But have you ever imagined whose fault it actually is?

No! The sites are open for only those who are of sixteen or maximum eighteen year of age. People below this age criteria are not allowed to be a part of any networking site. But are we following the rules? The answer is well-known. In fact there are social networking sites especially for youngsters that give them a mere introduction to the world of web and are not hazardous. There are hundreds of social networking sites that offer a huge deal of knowledge and experience for the once who use it wisely.

People with same minds from all around the world can meet and share their ideas which otherwise would have either been difficult or rather impossible. It is high time that people realize the importance of social networking sites in our day to day lives. They need to look at the brighter side of the coin and try to minimize the risk involved in social networking. It is not the social networking that requires improvement but the people who use it. In a nutshell, social networking is what we make it.