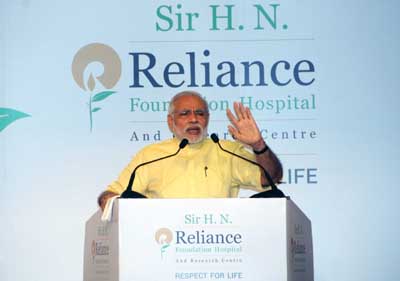 October 27th, 2014, Monday was special for Mumbians as on that day PM Narendra Modi Ji inaugurated Sir HN Reliance Hospital, Khetwadi, Mumbai. The foundation is totally rehabilitated and upgraded with one of the best doctors, latest machines, health-care facilities and everything else.

Founder and chairperson “Nita M. Ambani” and MD of Reliance Industries, “Mukesh Ambani” expressed gratitude to the PM and Governor Of Maharashtra for honouring the event. The ceremony was hosted by cine actor “Paresh Rawal” and event was attended by various cine stars including- Amitabh Bachchan, Shah Rukh Khan, Aishwarya Rai Bachchan as well as famous sports people- Sachin Tendulkar, Sunil Gavaskar. Other ministers also attended this event and reveal best wishes for recreating such a world class healthcare center in Mumbai in order to reach to the people in need.

Mr. Modi launched the event and spoke on how it is important to fortify health care facilities in the country. He also focused his attention on poor people who left suffer, starve and later on cause death due to efficient facility, as well as the lack of medical support. Mr. Modi also acknowledged that in our country medical facility is very poor in comparison to other nations and that is really making us embarrass.

With the contribution of Sir H.N. Reliance Foundation Hospital and Research Centre, it will assist in elevating the support and aid to those who really need help and that is too at very affordable cost. Many other provisions to help people, especially for below the poverty line also taken by the authorities to make Bharat “Happy and Healthier”.