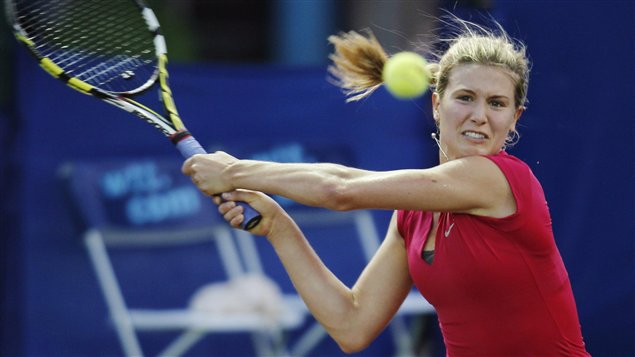 Canada is rejoicing, Eugenie Bouchard has become the first Canadian to reach the Grand Slam singles final at Wimbledon.  For any tennis player playing at Wimbledon is a dream and to play in the central court in Wimbledon watched by the royalty is to reach a pinnacle of success.  Wimbledon always holds a special place in the hearts of tennis lovers, the place exudes an era of special history and glamour that escapes the other tournaments like US, Australian or French Opens. Bouchard reached final by defeating third seed Siomona Halep.  Bouchard, who is ranked number thirteen at the moment, managed to defeat the French Open runners in a hard won battle.  She is going to face Petra Kvitova, 2011 champion in the final.  Kvitova defeated Lucie Safarvoa in another hard won battle, 7-6, 8-6 and 6-1.

Bouchard has good looks and calm temperament to climb the ladder of success in the international tennis arena.  This girl from Canada is 20 years old, has looks of a model and has confidence of a seasoned player. Though this is the first time she has reached the finals of a Grand Slam singles she remains unfazed and positive.  Throughout the earlier games she maintained her calm, collected and positive demeanor.  During the tournament, the play had to be stopped for sometime as one fan was overcome with heat and had to be helped out from the area.  Despite the interruption at a very critical juncture Bouchard remained focused on the game.  After the game is over, she said, that it was hard to focus and keep on playing and that it took a great deal of ‘mental strength’ to continue with the game. Whether she wins or loses in the final, Canada has a cause to celebrate the victory of their player who was able to reach the coveted goal of playing in the final in the Wimbledon tournament.

Bouchard’s opponent, Kvitova, won the title nearly three years ago, in 2011 when she defeated the reigning queen of tennis Maria Sharapova. After the surprise defeat of Serena Williams Kvitova is the only former Grand Slam winner left to play in the final.  Only time will tell who wins the beautiful silver trophy; however, Bouchard need not despair even if she does not win the trophy this time, she is young and still has years of playing better tennis left.  One need not gaze in the heart of a crystal ball to predict her future, she will be back at Wimbledon many times in the future.